Peter Barca was appointed as Secretary of the Wisconsin Department of Revenue by Governor Tony Evers in January 2019. 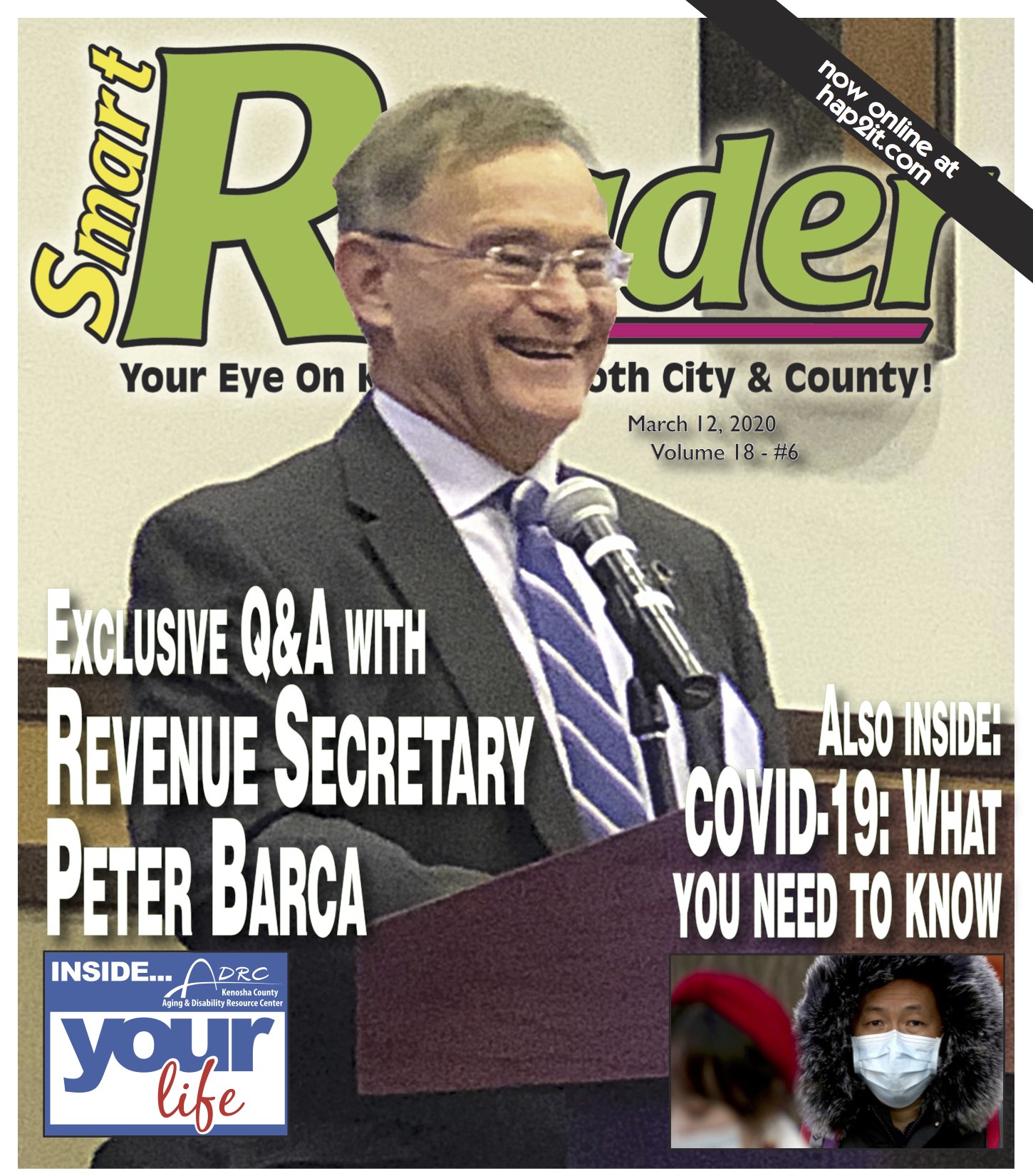 This story originally appeared in the March 12th, 2020 issue of The Smart Reader. To hear more, Secretary Peter Barca joins the conversation on Happenings Q&A on Monday, March 23rd at 2 p.m. Tune in to AM1050 WLIP for more.

Secretary Peter Barca, a lifelong citizen of Kenosha and Somers, served in the state legislature as the representative from the 64th Assembly District from 1985 until 1993, when he was elected to the U.S. House of Representatives. He returned to the state legislature in 2009 and served until January 2019. During this time, he spent seven years as the Assembly Minority Leader where he passed a wide range of bills and worked to improve and strengthen the legislative process. This included working with the Assembly Speaker to develop an MOU and to create productive bipartisan taskforces.

Following his time in Congress, Secretary Barca served for nearly five years as the Midwest Regional Administrator of the U.S. Small Business Administration during the Clinton Administration. He was also appointed to lead the National Regulatory Fairness Program, an initiative aimed at making regulatory enforcement more small business friendly. Secretary Barca later spent nearly a decade as vice president and then president of Aurora Associates International, an international project management company that conducted international development projects in more than 25 countries. Prior to that he had served as CEO of a non-profit organization focused on employment and training, housing, and rehabilitation services.

Secretary Barca began his career as the Director of the Friendship Camp, a camp for children with disabilities, as a teacher, and later as a team leader for students with special needs. He received his undergraduate degree from the University of Wisconsin-Milwaukee, received his master’s in public administration and educational administration from the University of Wisconsin-Madison, and attended graduate school at Harvard University.

Can you tell us what your job entails as the Secretary of the Department of Revenue?

The Department of Revenue is a wonderful agency with dedicated people that put our customers, partners, and taxpayers first. We have a very important and broad portfolio – from economists to help determine what information to provide to help our communities and businesses to make important investment decisions, to tax professionals who are exceedingly customer friendly. From our state and local finance experts who work very closely with local government officials, to our computer experts that protect Wisconsinites tax records, identities and refunds from cyber-criminals attempting fraud. DOR is also home to the Wisconsin Lottery which provides entertainment and important property tax relief. We have started a new Business Development and Government Relations (BDGR) Initiative this last year to help businesses with their needs and are doing Wisconsin Economics and Business (WEB) Roundtable events regularly around the state to share important economic information. We also have a bipartisan Taxpayer Enhancement Bill working its way to the Governor that has greater homestead relief, helps community development, and has many ways to make it easier to interact with the Department of Revenue as well as harmonize many federal tax laws to make it easier to file, comply, and take advantage of tax breaks for Wisconsinites.

What do you love about your hometown Kenosha?

First and foremost, the closeness of our citizens and families to one another. I often joke that there are 6 degrees of separation among people of the world, but I say in Kenosha there are two – you are someone’s cousin or someone’s cousin’s cousin! Our people are wise, generous, and care about one another! Also, we have been blessed with many wonderful leaders over the years that helped build our lakefront, parks, schools, health systems, and workforce into something to behold!

Can you tell us about some of your early work as a teacher for the emotionally disturbed?

I directed the Friendship Camp for children with disabilities for many summers where we had kids walk and talk for the first time – that was still my favorite job of all time. That prompted me to be the leader of a Day Treatment Center for children with emotional disturbances.

What can you tell us about your first election win in the 64th district?

It was surprising to many people, as I started off as a distinct underdog with many prominent local elected officials running. That made it all the more exciting, but to this day, I still treasure being selected to stand up and represent those in my home community.

How did you help with the creation of Kenosha Lakeview corporate park?

I was one of the key sponsors of the bill and worked hard to support Joe Andrea, who was the leader of the effort, and Mayor Antaramian to build a strong coalition of support from our colleagues on both sides of the aisle. I still believe it was one of the most important developments for Kenosha on the heels of American Motors unfortunate decision to stop making automobiles in Kenosha.

What did you have to do with the ‘one stop shop’ employment & training systems?

I was the lead author and Chaired the Employment and Training Committee where it passed and was proud that Kenosha was thus selected for the first One Stop Center. Although the creative credit goes to Governor Earl’s Secretary of Workforce, Howard Bellman, who conceptualized the idea.

In 1993 you went to serve in the U.S House of Representatives, what were some of the takeaways?

It was an exciting period in American History, as we had dozens of key initiatives that we passed to strengthen the economy. I worked with U.S. Secretary of Commerce Ron Brown to help advance the Enterprise Zones.

So in 2008 after taking a 14 year hiatus you decided to jump back in to politics and win the election for the 64th district once again. Why the long break and what made you get back into politics?

Dozens of community leaders asked me to go back when Jim Kreuser, who was minority leader at the time, decided to run for County Executive so that we might have someone who could still be in a leadership role to look out for Kenosha County.

How and what do you think you will be remembered for how you held office?

I would hope as someone who loved the Kenosha-Racine area and constantly put the needs of our community first as well as someone who helped advance our tradition of clean, open, and transparent government.

Can you tell us a little about your 2011 legislation to ban text messaging while driving?

The Kenosha City Council had passed it and wanted it to be a state law. My friend and colleague Senator Alan Lasee was interested in me being the Assembly lead and to make it a bipartisan bill. At the time, there were many universities who did research that found it was close to as dangerous as drunk driving.

Why did you step down from being the Assembly Minority Leader?

I had been the leader for four terms through some of the most trying times in our state’s history, and then the Foxconn issue came about. My caucus wanted me to vote against it, and I explained that I would never put my party before the clear needs of my community. With all of our growth in Kenosha and Racine and the opportunities and challenges Foxconn presented, it was my thought that the needs of our community in terms of workforce, infrastructure, and housing could benefit from my attention.

How is your relationship with Governor Tony Evers?

Extremely positive. I am so pleased to be a member of his Cabinet, as I appreciate his priorities, integrity, and genuine concern to put the needs of everyday Wisconsinites before special interests.

Any plans to run for Governor?

I have no plans to do so, but in politics you never say never, as the only thing certain in the political world is uncertainty.

Have you forgave Ian Matus?

Certainly. My Catholic upbringing teaches us forgiveness. Also, nobody was injured, which makes it very easy to hope that he and the others have learned from their mistakes.

How do you feel things are going with Foxconn today?

The huge pluses are their contributions to UW-Madison, UW-Parkside, and Gateway Technical College. Also, the smart cities initiative has benefited Racine enormously thanks to the efforts of Mayor Cory Mason and UW-Parkside.

Favorite restaurant in Kenosha?
One of the many family owned restaurants that make homemade style recipes.

Favorite food?
Great Italian pasta – my Mother’s was the best ever.

What do do on a day off?
Generally I save time off for travel, particularly to either visit my kids or travel with them.

Best vacation spot?
Florida in the winter – we have many relatives and friends there

Summer or winter?
Fall is my favorite but summer before winter

If you could time travel, where would you go?
25 years into the future to see what new innovations exist

Who do you look up to professionally?
Female: Mother Teresa – Male: Nelson Mandela

Any hobbies?
Participatory and active sports such as tennis, pickleball and skiing

What is your go-to karaoke song?
What a Wonderful Life by Louie Armstrong

Favorite sports team?
The Packers – professionally and the Badgers for college

What did you want to be when you grew up?
The Secretary of Revenue – just joking, even though I do enjoy it! An astronaut

Best advice you’ve ever received?
Apply to graduate school at Harvard University, as it helped me overcome my nervousness and gain a world class education, second only to the University of Wisconsin