With the recent news of local taverns having problems which our Kenosha City Council has decided to try to solve, lets take a look back at a small neighborhood joint on the city’s west side and its interesting history.

On February 29, 1960, Augustus B. Thompson was given the authority to build a new, but pre-built restaurant at 4609 38th Avenue. By the end of the year, Thompson would open the Dun-Roamin’ Restaurant and Motel. The long, narrow building had the small restaurant in the front and a very small number of rooms for rent in the back. Later on, the hotel rooms would become transformed into a 3-room apartment.

In the mid-1960’s it was known as Tommy’s Tap before Ken Penrod bough the building and opened Penrod’s Last Call Tavern, a country bar and grill in 1966.

By 1968, a new operator comes on, Ken Menning. He hosts a “Name the Tavern” contest and selects “Ken’s Korral” as the winner.

In late May, 1969, the tavern license is transferred from Menning to Julio Pucci and the name is changed to Little Club Six.  It didn’t take long for new owner Pucci to take the bar up a notch. Within two weeks of opening, the Little Club Six brought in Go-Go Girls dancing every night and the Country Playmates on the weekends. Things heated up over the summer with performances when  Suzy Q Duo, and Saboo the exotic snake dancer with live reptiles took the stage.

A March 1971 ad reads, “If nudity offends you, pass us by. Pucci’s Little Club 4609 38th Ave.” Miss Sue Marshall, a voluptuous dancer from California, makes her first Midwest appearance at Pucci’s in early 1971.

By May of 1971, Kenosha officials try to revoke the licenses of seven topless-bottomless entertainment venues in the city of Kenosha, one being the Pucci’s Little Six Club.

In August 1971, Josephy Brozosky took over as holder of the liquor license, the bar was named Mario’s (after Julio’s brother, and with Brozosky stating that he was not interested in bringing back the nude ladies.

Mario’s kept the live music going through 1971 as the tavern appeared to return to its country western old days of the 60s.

In 1974, it was known as the Pour House.  Licenses and management continue to fluctuate over the mid-70s until Frank Iaquinta takes over the place, then known as Club Morocco and offering 20 cent tap beers each day from 7-9pm. But Iaquinta didn’t stick around with his Club Morocco very long either. On the evening of September 24, 1975, Iaquinta was tending bar when a man entered the empty tavern with a revolver in his hand and wearing a ski mask. Iaquinta gave the man $210 from his wallet and another $35 from the cash register.

Perhaps it was the scare of the robbery, but the next month, Frank was out of the bar business, selling his tavern license to Lester Banovez in late October 1975.

This time, the thieves struck overnight, breaking in to the Razz M’Tazz the morning of Wednesday, April 27, 1977 and ran off with close to $300 in two bank banks and an undetermined amount of coins from the vending and game machines.

In late January 1980, the tavern was hit again by burglars. This time a hole was punched through an exhaust fan at the Sleepy Holly and the crooks were able to reach in and take about 50 pints of assorted liquors, with a value at $190.25.

In September of that same year, it was hit again, and in the same way. Thieves ripped the grate over the wall fan cover to enter the bar and steal several liquor bottles.

A few late night drinkers were upset when they were refused service at closing time on October 20, 1986. After the bartender told them the bar was closed, multiple gunshots were fired through the front door of the Foxy Lady II.

The following summer, 27-year-old Donald Banks pleaded guilty to a charge of causing injury in a July 18, 1987 stabbing of  a patron at the Foxy Lady II.

In April 1988, the bar was known as Smacker’s Bar and a man entered the bar at 3pm on a Friday afternoon and demanded money from the 22-year-old pregnant bartender. He struck the bartender and escaped with an undermined amount of cash. Christopher Hines was later captured and charged with armed burglary and endangering safety. He was identified, but he was not located until June of 1991 when he was living in Gary, Indiana. It would take two trials, but Hines would be found guilty and was sentenced by Judge Mary K. Wagner-Malloy to 12 years in prison.

In August 1990, Kilticks was given a ticket for disorderly conduct and for allowing two teenagers in the tavern.  A 22-year-old woman complained after she put money in the jukebox, she was told to leave. The woman wanted her money back and Kilticks pulled a gun and held it at his side until everyone left.

In September 1990, Morgan Simmons began arguing with some patrons in the bar at closing time and began firing a .45 caliber pistol in the parking lot. Nobody was injured, but Simmons got in his car and continued driving south on 38th Avenue while continuing to fire the gun at a car following him. Police found him parked in the Kmart parking lot at 4100 52nd Street.

Crime continued to accelerate around the tavern with a 24-year-old man being beaten and pistol whipped in the bar in early October 1990, and a woman received eight stitches after being beaten with a chrome pipe by a former boyfriend.

Due to the escalating issues over the past year, the City Council voted to revoke the liquor license for the Father and Son Tavern, closing the bar on March 5, 1991. The Council said that business owner Kurtis Kilticks accumulated 105 demerit points from August 1st to November 10 of 1990 for various violations.

The tavern license will be returned to its owner, Donna Pillizzi, who has owned the license since 1977, but leased it to other operators since 1983.

The Council asked Pilizzi to not reopen a tavern in that location but was allowed to sell her license to another location.

Roy Mock, was a local tavern owner who operated Pot O’ Gold Tavern, 2926 Washington Road. Mock filed an application to transfer his license to the site and open a new tavern in the location of the Father and Son Tavern. Mock was denied in May 1991.

It never became a bar again, but it did still bring in business owners, and more trouble. In 1993, it was known as the Home Front Restaurant and two masked men, one with a shotgun, robbed the restaurant of about $80 from the cash register right before closing on Monday, January 11, 1993,

The restaurant was robbed again on April 1993. This time by a 17-year-old who escaped with between $50 and $70. After the crime, the teen told a citizen that he wanted to get crack cocaine and mentioned robbing the restaurant, leading to his arrest.

Through the 1990s, it was briefly known as American Family Restaurant and Fat Sam’s Ribs. But by February 1997, the restaurant sat on the market with little hope for a new entrepreneur to take over.

Reverend Todd Cook was looking into a permanent home for his church. Formally instituted in 1992, the Community Baptist began meeting at Bullen Junior High from 1991 to 1993, then looked into other locations before Cook found this former restaurant/rowdy bar/strip club in 1998 and made an offer of $45,000. 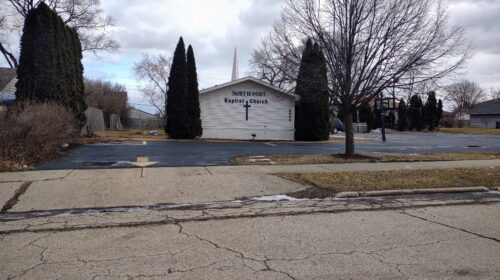 In May of 1999, the Community Baptist Church purchased the property and planned to remodel the building into a church. It was a major project. The entire building was jacked up and a new concrete foundation poured. Windows were removed, the interior was gutted, a new roof was necessary and a brand new 21-space parking lot was constructed. When completed, the interior includes two new central bathrooms, a nursery, a small kitchen, entry hall and a 60×20 foot wide auditorium that seats 100 for worship.

Hedman is a lifelong Kenosha resident, growing up in the Highview neighborhood before moving to Downtown Kenosha. He is an established artist, historian, and host of the Ktown Connects Podcast.